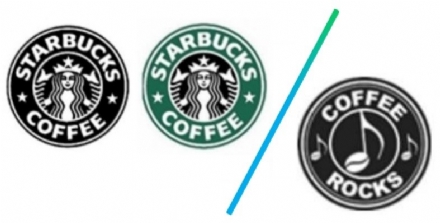 22/1/2019 | The judgment of the European Court of Justice (T-398/16 - Starbucks v EUIPO - Nersesyan (COFFEE ROCKS) signifies the end of a protracted legal battle which started in 2013 and in which Coffee Rocks suffered defeat.

According to the Board of Appeal, there is no likelihood of confusion between the figurative marks of Starbucks and Coffee Rocks, because the distinctive and dominant elements are different. In its appeal, Starbucks asserted that the Board of Appeal's judgment was incorrect and erred in omitting its assessment of the reputation of the older mark.

The Court also does not follow the judgment of the Board of Appeal. The fact that the marks are sufficiently different from each other to exclude the likelihood of confusion does not mean that the reputation and fame of the older, well-known trademark has not been infringed. The Court is of the opinion that the marks show sufficient similarities and stresses these visual similarities. The marks are characterised by their general equal appearance. Both marks are round and consist of two parts, namely a figure in the middle with a circle around it with two white lines. The words of both marks are also in the same position and are divided by two stars and two musical notes, respectively. Moreover, the colour combinations and the fonts are the same. Finally, the word 'coffee' is found in both marks. All these points of similarity should lead the Board of Appeal to assess whether the newer trademark is benefiting from the reputation of the older trademark.

The Court's criticism of the EUIPO is the fact that the EUIPO only assessed the concept 'similarity between both marks' with a view to establish whether there would be a likelihood of confusion as referred to in Article 8(2) EUTMR, while 'similarity between both marks' in the sense of Article 8(5) EUTMR does not necessarily have to lead to confusion. It suffices that the older mark comes to the mind of consumers when they see the newer mark, or if a 'link' between both marks is established. This does justice to the principle that known trademarks enjoy a greater scope of protection than unknown trademarks. After this judgment, the losing party could use a nice cup of coffee. Vorige